Does The Coach Have To Be Faster Than The Runner

Does a coach have to be faster than their runners?

This question came up while I was chatting with a young man who is chasing a fast marathon time and is also a coach himself. There are some folks who would suggest that to be guided to fast times, the coach needs to have run that specific time (or faster) before. We reflected on the discussion we had and both concluded that a coach doesn’t need to be faster than their athletes. It certainly can help with a “been there done that” aspect but that is only just one sliver of a very large pie that makes up a coach/runner relationship. What say we to the coach who has rigorously studied a variety of training methodologies and the history of our running greats? What about the coach who had spent years cultivating a wonderful way of communicating? What say we to the many other metrics, feelings, and general gratefulness that makes up running?

Speed is not a qualifier of good/bad or experienced/inexperienced. There are plenty of coaches who once competed professionally but have turned their attention to guiding athletes and there are coaches who realized their own physiological talents perhaps didn’t tell the full story of their coaching effectiveness. 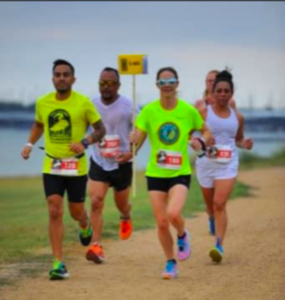 If you are an athlete who has explored paces your coach has not, think of constructive feedback for the coach. This is a forever growing relationship that supports runners as they explore their personal bests. Detailed feedback of how the body responds to the training, what goes through your head while pushing pace, and other little tips and tricks go a long way.

Paces are just a small part of the picture. Let’s not forget to keep running as a pure and inclusive activity. As I write this, I am also promising myself to see each runner as a unique person who holds a special reason to run. It is an honor to help anyone: from professional runners to someone breaking five hours in a marathon. Both are the same. The feelings, motivation, the emotional roller coasters are the same. The workout specificity is what is different.

Coaching is to serve the runner and when they help a runner solidify a deep intrinsic motivation to run, then the connection is completed in a beautiful and uplifting way.

Let’s talk about Coach Joe Vigil. In the 1950s he was a high school football coach who had the heart to help out three young men at the Alamosa High School in Colorado. The three boys wanted to form a track team but a coach was required by the school. Being the only hope for the trio, Coach Vigil assisted and became their coach; driving them to meets and overseeing their training.  From there, he fell in love serving as a running coach and made that his singular focus. From 1954 through to present day! Yes, that is six decades of coaching.hi is now in his 90s yet finds strength, passion, and desire to continue serving as a coach. Coach Vigil is known for guiding stellar runners to top tier performances: Deena Castor to her Olympic medal and Pat Porter’s eight cross country national championships are just a couple examples.

Over the decades, Coach Vigil “did” by learning, guiding, and enjoying his path as a coach. He really became a true coaching great because of diversity.

He was an advocate and a coach for everybody by coaching elite runners and guiding community runners alike. He has been a long time supporter of female runners with his daily running clinics.

Another fine example of “doing” is the lifestyle he led. He continues to eat a wholesome diet, and you can find him in the pool for his exercise. A far cry from the running paces he guides brilliant runners, yet manages to be on the same wavelength as them. There is a great book about his life called Coaching Greatness by Pat Melgares.

What makes a coach great is their willingness to develop their communication with their runners and have a true desire to learn the paths to success both mentally and physically. Just as there are roads on a map, there are many paths to success. A great coach sticks with their athletes through both thick and thin. Prolonged and/or recurring injuries are often times when athletes need the most support. Lastly, the coach grows as the runner grows.

Can you think of someone who coaches yet does not perform the physical part; perhaps in another sport? Circling back to the introspective reasons to run: why do you run? What have you learned about yourself along the way? What would you like to share to uplift and guide our running community?

Click here to have Rachael be your personal coach!